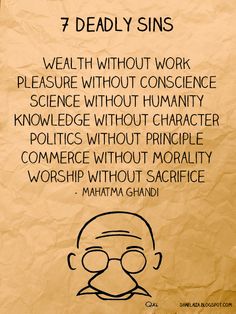 Deadly Sins – to be Overcome or Leveraged?

Waiting for our ‘negative emotions’ to subside and be replaced by positive thinking is a waste of powerful energy – and the catalyst for good that energy can become.

That anger can eat us up, or, it can move mountains when channeled as a force for change and action is well documented.

People say “You know, get over it, calm down.”  I say no way, harness that frustration, pride, feelings of treachery and use it to propel yourself to make stuff happen.  Come the day we ‘calm down’ chances are we will have moved into ‘can’t be arsed mode’ and apathy reigns.

Envy, one of the 7 deadly sins, is a significant motivator when applied as a benchmark for improving one’s lot. You know, I really envy that David Attenborough (Sir), the man who has made a career from traveling the planet, doing good and educating the world. Man, the blokes 90 years old and he’s still at it, campaigning, working, living large.  Who do you envy? It’s a significant pointer to that which is missing from jobs, careers, organisations, countries, relationships.

Looking at the world, I really Envy the Swiss Canton system that creates a widespread sense of responsibility and self-reliance. It drives me to challenge our political system and to fight, sometimes with anger, at those who think we are stuck with what we have here in the UK.

Does pride come before a fall or does it drive your legs to keep going as you approach the Marathon finish line – “I’m not willing to tell my mates I walked the last 700m is the thought that keeps me going anyway…”.

Pride in our industry, our country is more than flag waving, or social media ranting. Pride can be the force that challenges the status quo. Pride in appearance, pride in our standards, pride in our work, pride in our values – held fast in the face of adversity.

Labelling an emotion negative is the slippery slope to shoving it, unacknowledged, into the cupboard only for it appear later as so many bitter skeletons in the cupboard.

We don’t have feelings – our feelings have us – when we let them get in the way of active citizenship.