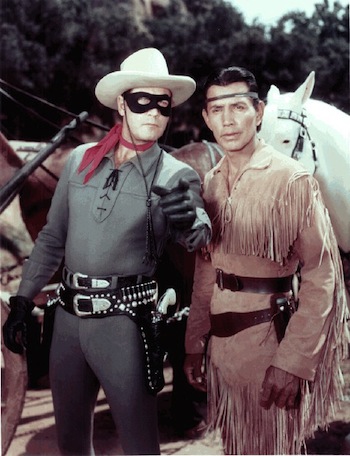 The Not So Alone Ranger…

The Lone Ranger was never alone for goodness sake, he had Tonto as his trusted sidekick and of course his horse, Silver, who was as a trusty a companion as a person could hope for.

In fact, Tonto, made his initial appearance in the 11th episode of the radio show. Fran Striker (the writer) told his son that Tonto was added so the Lone Ranger would have someone to talk to.

Someone to talk to.

Here are some of the things we so often, by habit, try to do alone that are made better by the inclusion of someone to talk to. And it seems the higher our position in a company becomes, the more things we try to do alone:

I think I’ll pin it by my desk as a reminder to stop the relentless (Hollywood driven, environment conditioned, society induced) pull to be a Lone Ranger. Lone Rangers don’t make good Collaborators or Team Players.

“In a real sense all life is interrelated. All people are in an inescapable network of mutuality, tied in a single garment of destiny. Whatever affects one directly, affects all indirectly. I can never be all I can be until you are all you can be, and you can never be all you can be until I am all I can be. This is the interrelated structure of reality.”
Martin Luther King