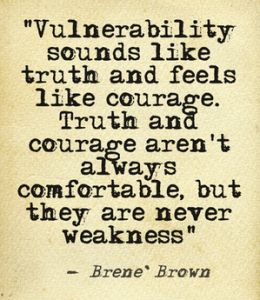 The Requirement For Vulnerability

I’d often wondered why the enduring relationships I have with my fellow Royal Marines seem to have an enduring and robust foundation of Trust to them.

At the risk of boring people with military virtues that can be difficult to transfer, I concluded there is a key ‘need to know distinction’ in commerce and industry from the Power of Teams  – that embrace Vulnerability.  (And if I can talk about vulnerability within the Royal Marines, surely I can get past macho poo pooing in the construction sector?!)

The Power of Vulnerability.

When someone opens up their rawness, the fragility of being human, the clear signal that they are far from perfect or ‘sorted’ or, immune to struggles in both the inner and outer world, Trust tends to take a transformational shift. Our connection to them can move from transactional and superficial to transformational and whole.

My hypothesis that it’s not the endurance of military tough training or operational experience per se that creates bonds, its open and present shared vulnerability.

No one gets through Royal Marine training without at some point being at their ropes end; either, emotionally, mentally or physically. Sometimes all three.  There is also no monopoly scenarios on finding oneself at the end of one’s rope.

Once we have been in the company of someone who has shared their vulnerabilities, its really difficult not to feel that they trust us and that that trust is  a privilege being bestowed.

You don’t need to pretend, or there is no point in maintaining a pretence of ‘strength’ or infallibility around people who have seen you in a vulnerable state. It allows one to be real, not fake, just like all the other human beings.

Vulnerability is in essence an exercise in sharing parts of yourself that your ego may prefer to keep under wraps. It is the foundation of relationships and teams that have strength and depth*:

I’ve certainly been all of the above and have not been able to move on until having the courage to speak to another person and be vulnerable.

Courage was mentioned as its a bigger quest for men to reach vulnerability. Men are programmed / taught to go into their caves and battle their own way past being vulnerable. Women are naturally more empathetic, so,therefore are able to easier reach out and not go it alone.

All male teams that lack vulnerability tend to be defined by individual struggle versus collective support.

Women reach out, men go to their caves. Teams are pretty crap when everyone’s in their cave. (For cave read silo, project discipline, department, regional office)

Fortunately, vulnerability is not just a function of too many runs around the assault course. Vulnerability is a conversation. See * above. Anyone can have that conversation if they are willing to create Vulnerability based climates and consequently set in place the conditions for high performing teams and collaboration.

The first law of Vulnerability. Start with you. What you give out – you get back.