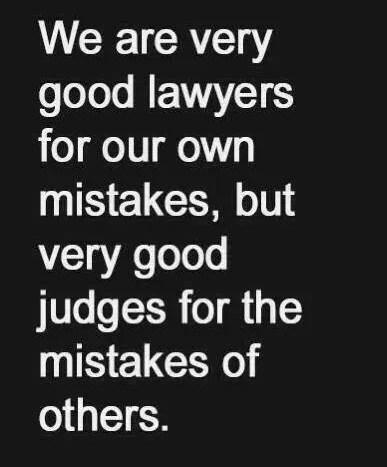 The ‘Rush’ To Judgement.

It’s ‘a rush’ in the sense it makes me feel good. I get to be right about you (in my head) as there is no one else in there to counter my opinion.

The lighting speed at which we make a decision about why another human did, or, said what they did is quite amazing. Then the counter speed when we slowly build up all sorts of justifiable evidence, without any validation, is even more impressive (or laughable or bonkers).

Right now, let’s boldly say all of us will be nurturing some negative judgement we have made based on:

Self aware dudes don’t necessarily stop the rush the judgment – they just catch themselves and choose to validate before contributing further to the head drama.

They’ll ask themselves validating questions to make sure they have not got carried with themselves in making 2+2 = 79.

“Maybe that challenge Mary made to me in the meeting was not a wholesale attempt to undermine my authority. Maybe she’s just diligent and needs more evidence before buying in to my idea?”

You get the idea.

Most of the rush to judgement can be tempered by applying the notion of ‘seek to understand before being understood principle’.

In powerful teams, there is far more reflection and a drive to understand rather than judge – that’s why they don’t get bogged down in so many self made dramas.